So ever since the beginning of the week I’ve been watching workers scurry around the site of the Rockefeller Christmas Tree, trying to erect something that resembled a photo I’ve seen once from Coney Island. It involved lots and lots of light bulbs attached to curved steel. Yea…sounds like an amusement park right? Well the mystery has been revealed! “Electric Waterfall” is a sculpture by London-based artist duo Tim Noble and Sue Webster. The two artist’s work have always involved light or shadow in some form or another. In this piece, which will be on display at Rockefeller Center (GMAP) through April 4th, the duo toys with fears of mixing water (simulated, that is) with electricity. 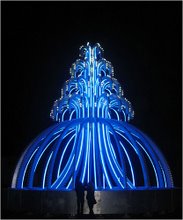