As promised last Friday, this week I’ll be posting about recent convergences that I’ve noticed between the genres of fine art and architecture (and interior design). Traditionally, there has always been a clear line between these disciplines, with fine art maintaining a certain arrogance or pretentiousness against the others. But recently, a few notable works, by notable artists, have begun to blur these boundaries, creating a free-for-all orgy of cross-pollination. I’m not promising a conclusion because, frankly, I don’t know why this is happening, or what the ramifications will be. But perhaps by the end of the week I’ll have a better idea. SO, let’s take a look at the work! 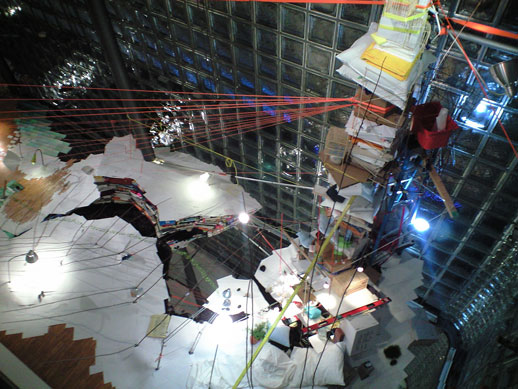 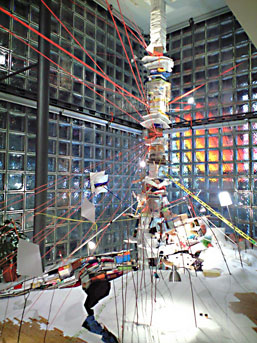 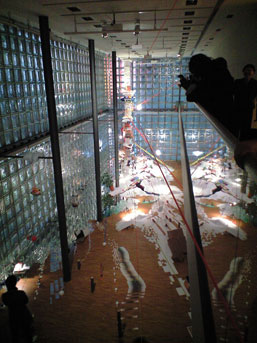 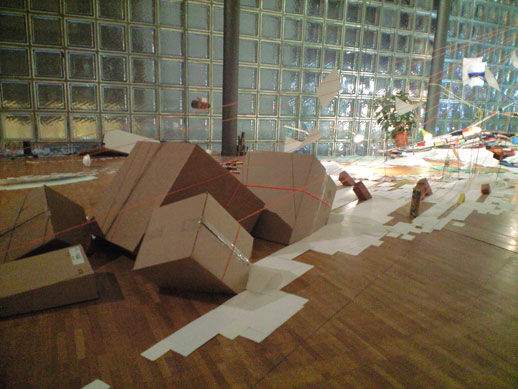 NY-based artist Sze is widely known for her site-specific installations. In her most recent work in the grand exhibition space on the 8th floor of the Hermès store in Tokyo, Sze uses common consumer objects – everything from lamps to pillows to cardboard boxes, thread, sheets of paper, chemistry sets, humidifiers and toy cranes – to create a giant standing sculpture. The objects, piled high toward the ceiling, toy with our sense of fear and stability. Precarious as it appears, the structure reassures us (does it?) with it’s numerous suspension ropes that invoke images of grand engineering feats such as bridges and skyscrapers. Also at play are the many scattered objects on the floor that guide our eyes to the main structure. It almost looks like a sprawling urban city.