There is a very interesting show going on right now at the Museum of Contemporary Art Tokyo (through July 6) titled “Rooftop Gardens.” The concept is based around 10 works by 10 artists that deal with the garden as a symbol of how humans and nature interact with each other. One of the unique characteristics of this show is that it features contemporary artists who are currently active, as well as pieces from the Taisho (1912-1926) and Showa (1926-1989) periods that are housed in the Museums archives, rarely coming out into public. Here are some highlights:
(all images are courtesy of MOT unless otherwise noted) 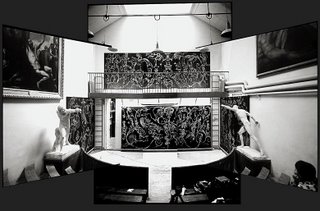 I “the grotesque garden”
As you come off the escalator on the 3rd floor the show opens with a work by Nicolas Buffe, a French artist currently based out of Tokyo. The word “grotesque” originates from the Italian word grotta, or cave, and refers to the designs that were unearthed by the Romans during the 15th century. You can read more about it HERE, but the chalk drawings essentially illustrate a dark mythical garden, much like the one that the Romans discovered. 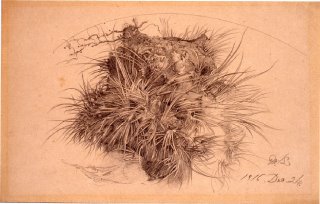 II “looking at a garden”
The next piece you encounter as you make your way out of the cave is a Taisho era piece (1916) by Michisei Kawano. This was one of my favorite pieces of the entire show. Michisei was known for his detailed sketches of shrubs and flowers around his home. Starring at the pieces, which, all except for the paper they were drawn on, appear frozen in time, I was reminded of the importance of observation, and how the act of looking helps us establish our place in the surrounding environment. 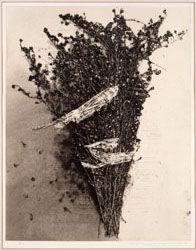 VII “the recorded garden”
More than halfway through the exhibition I found myself mesmerized by the etchings of Tadayoshi Nakabayashi. For the majority of his career, Nakabayashi has focused on the theme of “decomposition.” Looking at his several “Transposition” print series, I began to think about the ephemeral qualities of nature, and how a garden (nature cultivated by human hands) would not retain its form for very long without us. In that sense, the garden truly is a “record” of our existence. 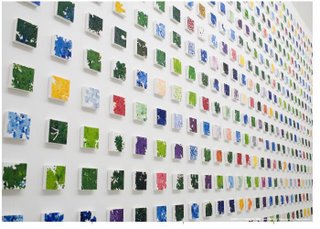 X “garden in the sky”
The culminating piece of the show is by a relatively young painter named Satoshi Uchiumi (31 yrs old). To simply describe the piece, on one large canvas Uchiumi has attached a myriad of smaller canvases, each possessing its own colors and, from close up, each standing alone as a separate piece of artwork. Entitled “3 thousand worlds,” the work refers to the Buddhist concept of “A great World System of a Billion Worlds.”

All in all I thought it was a very strong show. And very spiritual.
My family was not religious but it must be my western influence, because I often associate a “garden” with the Garden of Eden. To me, the Garden of Eden represents a transition in which Adam and Eve become aware of self-knowledge, and for that they are banished from the sanctuary. What I took away from the show was that we, along with our knowledge and human skill-sets, are responsible for cultivating our own garden. 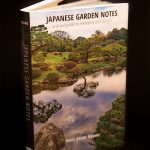 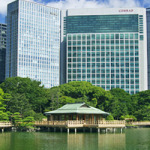 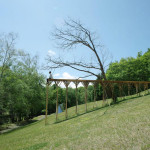 what all language wants to be when it grows up.