I spotted this interesting tid-bit last night and thought I would post it to kick off the week. Ruffy, the protagonist of the popular manga series ONE PIECE, will be gracing the cover of the January 2010 issue of Men’s Non-No, which is, according to Mekas, the sales leader of all Japanese men’s fashion magazines. The article goes on to explain that this is the first time a manga character will be featured on the cover in the mag’s 24-year history.

It’s actually part of an interesting trend that we’ve see gain steam over the year. The blurring of boundaries between manga and real-life probably hit a high-note back in September when you had a group of wives step forward into the public to complain about their husbands who were cheating on them with girlfriends who resided within the Nintendo DS video game Love Plus. The husbands were sleeping, taking baths, and basically doing everything aside from having illegitimate children, with their virtual mates.

The new issue of Men’s Non-no, which hits stands on December 10th, looks like it may be setting us up for another year of combat in which we must fight to protect our homeland from those thieving virtualists. We will not forget the moments of silence and days of mourning as wives watched their husbands disappear with 20-somethings in short skirts and binary code. Nor will we forget the magazine models who now face extinction. We have been awakened to danger and called to defend our freedom from those who seek our occupations and our societal standing. 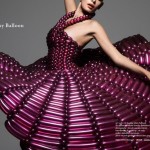