Before we get started with the top posts of 2009, I have one final home I wanted to show you. Remember Terunobu Fujimori’s Takasugi-an Teahouse, which looked more like a tree house not for the faint-hearted than a zen tea house for the calm-hearted? The structure made considerable rounds in the blogosphere back in March (see here, here and here). I had been hearing rumors that his new work, Chocolate House, was near completion and had been trying to track down images. It turns out the name had changed and was originally titled Copper House. So here are some images, collected from different sources, of Mr. Fujimori’s latest tea house located in Kokubunji, Tokyo.

The theme of his latest work is “skin” and is lined with copper plates whose appearance, perhaps, later prompted the name change from copper to chocolate house. And of course it wouldn’t be a Fujimori home without one of his signature floating teahouses. 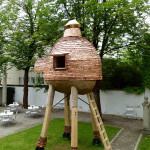