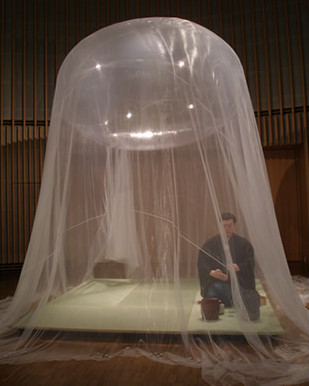 Not sure what to do for your first design event of the new decade? On January 3, 2010, make a trip to IMS Plaza in Fukuoka for a traditional tea ceremony in a not so traditional setting. Fuan (literally, floating hermitage) is a floating tea room comprised of a helium balloon veiled with an ultra-light material called super organza. Weighing in at a mere 11 grams per square meter, the weight of the material counteracts the upward pressure of the helium, creating a perfectly balanced structure without walls or pillars.

On a side-note, the material was first introduced into the design community in 2007 during TOKYO FIBER’07――SENSEWARE curated by Kenya Hara.  It was used extensively by artists and designers like Yasuhiro  Suzuki, Naoto Fukasawa and Taku Sato. Kengo Kuma also participated in the exhibition. 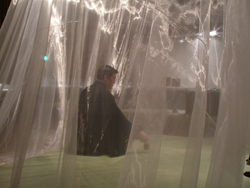 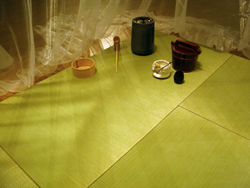 The architect Kengo Kuma talks about his creation, which was originally developed in 2007, as being a space of virtual reality where a state of conciousness in the form of a  floating body can exist. Unfortunately tickets to enter the actual floating tea house are already sold out but you can still (get there early enough to) grab one of the 20 seats surrounding the structure. 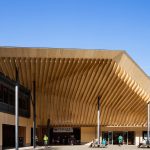