March 17, 2011 / Johnny / Comments Off on Hitler finds out that people are stockpiling food in Japan

In the wake of the Sendai earthquake and Tsunami the foreign media have picked up on a surprising phenomenon. There are no looters in Japan. But an unexpected problem is troubling many in Tokyo and across Japan. An email I received this morning from a friend in Tokyo:

I think there is no difference between Japanese housewives and the looters in New Orleans in the sense both of them are selfish.

That’s right. Despite calls from many to act rationally and calmly, the “crazy shufu,” as they are being called, are stockpiling food like it’s nobody’s business. Which leads us to our clip below in which the Führer discovers what is going on. And he is not happy.

The clip is only subtitled in Japanese but Hitler begins his rant by questioning the motives behind the stockpilers.
“What do you expect to do with all that food, open your own store?” he yells and goes on. “You’re from Kansai. You don’t even like natto! This is not the time and place to try and overcome your likes and dislikes!” The rant then culminates in a plea to donate any leftover money or food to the people in the North.

Although humorously done, the clip is a serious call to people to not just think about themselves but about the less fortunate.

The Hitler remixes originally went viral in 2008, parodying everything from Hitler getting scammed on ebay to Hitler reacting to all the Hitler parodies being yanked last year from youtube due to copyright claims. 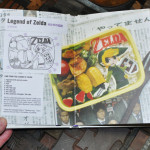 Art in support for Japan