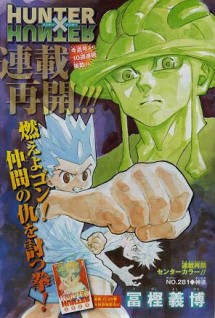 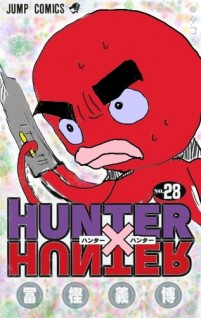 the above images represent hypothetical covers created by fans and are not meant to represent what the actual cover might look like.

Sorry, this is going to be really geeky, but I was so incredibly stoked to hear that a new volume of Yoshihiro Togashi’s epic comic HUNTER x HUNTER is coming out next month. For fans of the comic it’s been an excruciating 18 months since the last volume was released, and an equally excruciating 10 years – the time it’s taken Togashi to produce a mere 10 volumes.

To put things in perspective, compare it to ONE PIECE, the equally epic tale of pirates. The 2 began around the same time (late 90s) but ONE PIECE has trumped HUNTER x HUNTER in quantity, producing 62 volumes at a rate of roughly 4 per year. But that’s actually what one would expect from a hit comic. What’s astounding, and perhaps exemplary of his status in the industry, is that Togashi has managed to get by, both from his editors and his fans, at such a grinding rate, while keeping them both on board. In fact, message board will indicate that his behavior, interpreted as a mix of laziness, narcissism and a keen susceptibility to “personal issues,” has, at worst, only aggravated fans. (The author has recently attributed his hiatuses to a new addition to the family 2 years ago. But it doesn’t make up for the past 10 years.)

In my mind Togashi’s behavior was driven by conceit, combined with his need, or lack thereof, for additional income. his previous hit, YuYu Hakusho (another one of my childhood favorites) not only established him as one of the great comic book writers at the time, but it’s likely that it also continues to generate enough cash for him to live comfortably with having to worry about meeting deadlines.

The euphoria around volume 28 was only compounded by the announcement that an additional volume (29) would be consecutively released the following month in August. Two volumes in two months is unheard of for Togashi! However, fans including myself are not getting their hopes up. A sudden sprint could very well be the foreshadowing of another long dry-spell. Unless of course the ideal scenario occurred, which would be that Togashi puts an end to his enticing story in the next 2 volumes, thereby putting me out of my misery. 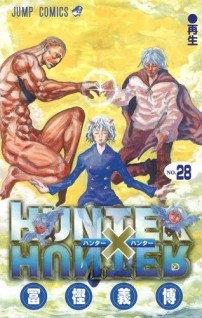 So this is what the actual cover of volume 28 looks like.