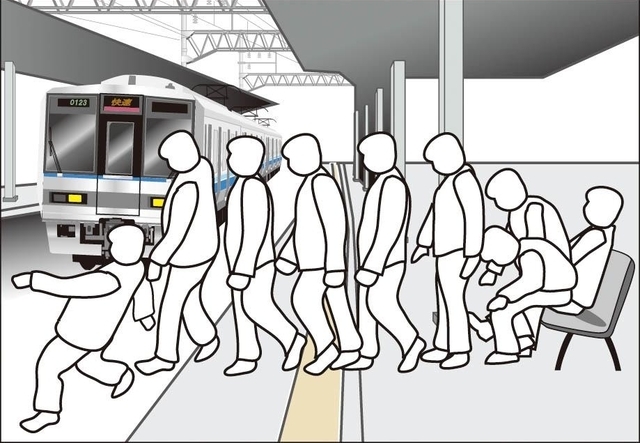 After analyzing 2 years worth of data pertaining to drunken people falling onto train tracks, a group of data scientists at the West Japan Railway Company have come to a startling conclusion. Ninety percent of falls are the result of people, in a drunken stupor, getting up from a bench they were sitting on and walking straight off the platform.

The results are surprising because conventional reasoning and logic assumed that drunks would wander closer and closer to the ledge and eventually fall off. The data, however, showed the opposite. Only ten percent of drunks gradually drifted towards the ledge, while an outstanding majority briskly walked off the ledge as if they knew exactly where they were going.

After reviewing the results, JR West is now considering a sweeping reorientation of all platform benches. They have already rolled out a few testing sites to see if a drop on falls can be measured.

Incidents involving people falling off the platform have been on the rise in recent years, which is what prompted the study. According to the MILT, in 2013 there were 221 incidents, a figure that has doubled over the last 10 years. And of that, alchohol-related incidents rose 4-fold.

The 2-year study, which was conducted in the Osaka, Kobe and Kyoto regions, utilized footage captured from platform security cameras. Data scientists analyzed 136 different incidents captured on camera. “The results were unexpected,” admitted Naoyoshi Tsujino, who helped conduct the study. “We observed a large majority falling [off the platform] within seconds of getting up.” Kensuke Kawakami, a train station planner said “We realized that randomly reminding passengers wasn’t enough and that we needed to come up with a different plan.”*

*all quotes translated from Japanese to English by author