We wrote about graphic designer Shigeo Fukuda last month but there was a side of him, one that’s rare amongst graphic designers, that we didn’t get to discuss. When he wasn’t creating posters for social and environmental causes, Fukuda applied his visual wit and allusion to a series of assemblages constructed from what could only be construed as trash.

His 1987 piece “Lunch with a Helmet On” is made from hundreds of forks, knives and spoons. But when a light is cast onto the sculpture at just the right angle, a shadow of a motorcycle is cast onto floor, revealing the assemblages true intent.

“Aquarium for Swimming Characters” (1988). The shadows of the fish reveal their names in kanji characters

It’s said that Fukuda developed a keen interest in three-dimensional art in the early 80s after his daughter Miran (also an artist) was born. He would create wood block sculptures and toys for his daughter, which eventually led to a fascination with M.C. Escher-like illusionistic art.

Fukuda himself was born into a family involved in the manufacturing of toys, which may have somehow contributed to underlying interest in 3D objects. In speaking about his own work Fukuda once said that he finds purpose in life from mundane, ordinary things that, upon second look, make you stop, stare and then slap your knee.

As a follow-up to “Lunch With a Helmet On” Fukuda obtained the rigging plan of the M.S. Shin-Nippon Maru and assembled a shadow sculpture from 2,084 pairs of metal scissors 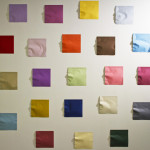 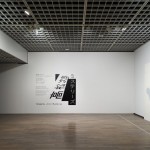 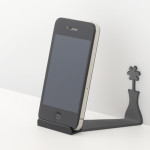 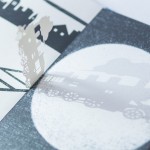 Motion Silhouette | a storybook of light and shadows