If you ever have a chance to see the work of Japanese artist Rima Fujita in New York, Los Angeles, Singapore, or some other major city around the world, do yourself a favor: get off the internet, switch off the TV and go have a look. It’s the perfect antidote to the hate-filled vitriol that seems to dominate the airwaves and megabytes these days.

Your latest chance is at a show in Tokyo that just opened.

Born in Tokyo but raised in New York, Fujita is a multicultural artist who draws on inspiration both from Japan, Western aesthetics but also Buddhism. Her work is an eclectic and colorful mix of patterns and imagery sourced from Eastern symbolism, Buddhism but also dreams. “My creative process is meditative,” she says, explaining that she simply draws what comes to her. Often, the central figure in her paintings are women who appear in Buddhist tales.

Call it fate or call it accidental, Fujita’s work went on to inform her strong desire to empower you girls and to strive to break down some of the gender discrimination that is prevalent in Tibet and also India. In 2001 she established “Books for Children,” an organization that produces children’s books and donates them to children in need around the world.

Fujita’s current exhibition in Tokyo is titled “Pilgrimage” and is based on a 10-day pilgrimage throughout India she made earlier this year, visiting the “Eight Great Places” where Buddha had performed certain miracles. In addition, original drawings for her upcoming book – the 6th in her series she’s created for Tibetan children in exile – will also be on display.

“Pilgrimage” is on display now through November 1, 2016 at Isetan Art Gallery in Shinjuku, Tokyo (5th floor). 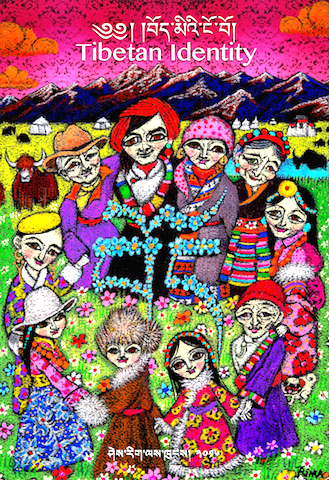 100 Views of Tokyo Now Available as a Book