New Illustrations of the Ghibli Theme Park, Set to Open in 2023

Last year we reported that Studio Ghibli and Aichi Prefecture had reached an agreement to host Ghibli Park, a large-scale Ghibli-themed amusement park that would be the first of its kind. The plans called for the Aichi Memorial Park, a former expo site that had previously hosted several Ghibli exhibitions, to be renovated into Ghibli Park. But substantive details had been lacking, until today when the prefecture released illustrations of the park’s different areas.

What we know so far is that the park will be separated into 5 main areas, with each area being assigned special themes and Ghibli movies. Below are the 5 areas. Note that translations are not official. The park was originally scheduled to open in late 2020, but that date appears to have now been pushed back to 2023.

Area 1: Seishun no oka (the hill of youth)

This area will act as the main gate and will include buildings in the style of 19th century science fiction architecture, reminiscent of Howl’s Moving Castle. The area will also utilize the land’s elevation to recreate the Chikyuya farmhouse from the film, Whisper of the Heart.

This indoor facility will be built inside an old enclosed heated swimming pool and can be enjoyed year-round, regardless of the weather. As the name implies, it will be home to exhibitions, film screenings and all sorts of memorabilia. If the illustrations prove accurate, this could be a really cool spot.

Located in the Northern part of the park and surrounded by greenery will be a section dedicated to the film Princess Mononoke. A replica of the Tataraba irontown will be the main attraction, complimented by sculptures of some of the fantastical beasts like Tatari-gami demon and the Okkoto-nushi boar god.

Area 4: Majo no tani (Valley of the Witch)

This will be where the magic happens, for fans of Kiki’s Delivery Service. A replica of the baker’s home where Kiki lives, as well as several rides for children. In keeping with the magical theme, it will also have a replica of Howl’s moving castle.

Dondoko is the song that little Mei and her sister Satsuki sing to make the small seeds sprout and grow into a gigantic tree. Hence, this area will be dedicated to My Neighbor Totoro. Conveniently, it is already home to a replica of the farmhouse that the girls lived in. But the area will be expanded on to create a more immersive experience of the film.

Update: this article was updated on February 3, 2021 to reflect new delayed opening date, as well as new renderings of the park released by the municipality. 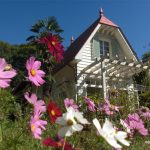