The design for the Tokyo 2020 Olympics torch, which will kick off the opening ceremonies next year, was unveiled at a press conference in Tokyo today. Designed by Tokujin Yoshioka, it’s form is a nod to one of Japan’s most well-known and beloved symbols: the cherry blossom.

In March of 2020, as cherry blossoms begin to signal the arrival of Spring, the Olympic Torch Relay will begin and will traverse the entire country. It was designed by Tokujin Yoshioka, one of Japan’s most notable contemporary designers, who incorporated the cherry blossom motif into the form, which is made from a seamless, single sheet of metal. In fact, the same aluminium extrusion process is used to create Japan’s shinkansen bullet trains, another nod to one of the country’s marvels.

But the torch is also meant to remind us of Japan’s efforts pick itself up after the devastating earthquake and tsunami in 2011. Roughly 30% of the torch is made from recycled aluminum that was used in the construction of prefabricated housing units for those who were displaced. A total of 10,000 torches will be produced for the event.

The Tokyo 2020 Olympic Torch Relay will be held over 121 days – an unusually long period. It will begin on March 26 and will be passed along to roughly 80-90 runners each day. According to the committee, “the flame will burn brightly and forcefully through the wide variety of seasons, climatic conditions and geographical regions that make up the Japanese archipelago” 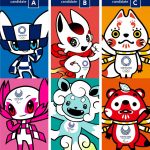