Today — May 22, 2019 — in Japan, at a baseball game at Koshien Stadium between Hanshin and Yakult, a maiko-san threw the opening pitch. It was a dreamy scene as her light orange kimono fluttered through the air. The ball bounced once and landed in the catcher’s mitt. The batter swung and a strike was called. As the crowd cheered on the apprentice geisha I was reminded of the history behind Japan’s ceremonial opening pitch.

Although the ceremonial first pitch is an American export, Japan has embraced it to its fullest. And there’s an element to it that’s uniquely Japanese.

The ritual is said to have originated in 1892 when, according to the Omaha Daily Bee, “Governor McKinley threw the ball into the diamond” from his seat, rather than the mound as is custom today. The pitch went on to evolve as an event between the pitcher and catcher. There was no batter.

In Japan however, the ritual involves the batter, who is always supposed to swing and miss on purpose.

Japan’s ceremonial first pitch dates back to 1908 when the Reach All-Stars — the first professional team from the United States to tour Japan — came on a promotional junket. It was a big deal.

The noble statesman Okuma Shigenobu was to throw the first pitch. As former Prime Minister and founder of Waseda University, it’s hard to overstate how symbolic and important a figure he was.

In what was surely a distressful nomination, Shoji Yamawaki, the top batter in the Waseda Baseball Club, was chosen to bat.

No one will know what was going through Yamawaki’s head as the former Prime Minister and perhaps the greatest nobleman he ever faced off with, threw the ball towards him and it hit the ground, rolled and stopped.

According to some records, several American players began rushing towards the ball to pick it up. But that would mean an incredible failure and embarrassment for Okuma and Yamawaki couldn’t let that happen. So he swung his bat, a strike was called and the crowd cheered. Since then, it’s always been customary for the batter to swing and miss on purpose.

Of course, that’s not the only thing that makes the Japanese ceremonial first pitch unique… 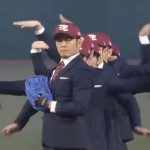