After purchasing a tiny plot of land in Tokyo, architect Takeshi Hosaka (previously) began creating the blueprints for a home for his wife and himself. Originally intending to build up, the architect pivoted after he and his wife were inspired by a book about Edo-period families who lived in a single floor, in a single space. Hosaka then redrafted his plans, which included only the raw ingredients for happiness.

Hosaka had lived with his wife in Yokohama for 10 years, in a house he designed. But life has a way of mixing things up just as soon as you think you’re settled. The architect got a job teaching at a university in Tokyo and the commute proved too burdensome. So they purchased a tiny plot of land and immediately began a 3-month observation of sunlight on the site.

Hosaka’s plans called for a 17.7 sq meter layout (about 190 sq feet) that incorporated all 5 elements that the ancient Romans called for a happy life: Knowledge, Bathing, Drama, Music and Food. However, the observation of sunlight revealed that during the winter hours the plot of land saw basically no sunlight. So Hosaka also incorporated a plan for 2 curved roof skylights that created magnificent beams of light.

When it was done, the home was everything the couple needed. They could cook in the kitchen, bathe outside under the stars (or shower inside on a cold night), read and work, interact with the community and enjoy the passage of time, all in 17.7 sq meters and not a centimeter more. You can see more photos on Hosaka’s website. 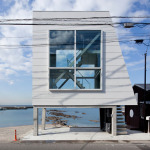 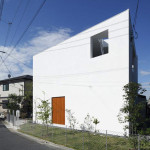 inside out by Takeshi Hosaka Architects 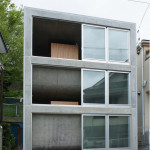 House in Zushi by Takeshi Hosaka 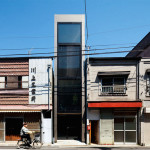