July 23, 2019 / Johnny / Comments Off on Recipes for Food that Appear in Makoto Shinkai’s New Film Tenki no Ko

Makoto Shinkai, whose hit animated feature film Kimi no Na Wa (Your Name) put him on the global map, has a new film that just landed in theaters in Japan. For those outside Japan, you’ll have to wait until early 2020 to see Tenki no Ko (Weathering With You) but for fans looking to get just a little taste of the film, you’re in luck.

In the film, there is a scene where the the heroine, Hina Amano, prepares a series of creative dishes for protagonist Hodaka Morishima. They include potato chip fried rice and instant ramen salad.

The odd yet alluring dishes were created in collaboration with recipe website Kurashiru, who has released the recipes for anyone to try.

The 2nd dish is salad with instant ramen. For this dish there is only a photograph and no recipe, supposedly because it is fairly self-explanatory. Simply take any instant noodles you have, crush them and add them into your salad for added crunch.

We haven’t tried any of these recipes yet and can’t vouch for the outcome but what is it about anime depictions of food that look so amazingly good?

Weathering with You (Japanese: 天気の子) is a Japanese animated film written and directed by Makoto Shinkai. The plot revolves around high school freshman Hodaka Morishima, who leaves his home on an isolated island and moves to Tokyo, but immediately becomes broke. To make ends meet he takes a job as a writer for a shady occult magazine but it rains day in and day out. Hodaka then meets a girl named Hina Amano who possesses a strange and wonderful ability: the power to stop the rain and clear the sky. The film is expected to be released outside Japan in early 2020. 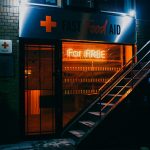