“Ikemen Kanno Emaki” (イケメン官能絵巻), or Scroll of Handsome and Sensual Men, is a series of artworks that were installed earlier this year at Kokujoji Temple in Japan’s Niigata prefecture. Established in the year 709, the temple is believed to be the oldest in the region. And yet it, along with many other temples dotted across the land, has been plagued by a decline in visitors. So in an attempt to drum up interest, particularly among young women, head priest Kotetsu Yamada decided to invite Tokyo-based artist Ryoko Kimura to create the scrolls.

Ikemen Kanno Emaki feature five well-respected and popular historic figures, all of whom have connections to the temple: Uesugi Kenshin (a 16th century warlord), Minamoto no Yoshitsune (a 12th century general of the Genji clan), Musashibo Benkei (a 12th century warrior), the zen master Ryokan Taigu and the mythical but alcoholic demon leader Shuten Doji.

The images did exactly what the priest had expected: they created quite a buzz. However, they also attracted criticism from the city’s board of education and city authorities who say the the temple did not get proper approval. The temple is fighting these charges, saying that they are prepared to give up their landmark status to keep the scrolls.

Here is the location of the temple if you would like to visit. 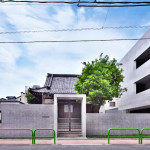 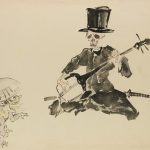 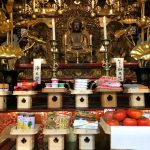