Along one of Ginza’s many backstreets, just steps from Showa-dori, sat an L-shaped plot of land. At just 2.7-meters wide, or a little less than 9 ft, it had remained vacant for the past 3 years, obscured by the shadows of the towering grey buildings around it. Until finally a developer stepped in.

The developer teamed up with So Teruuchi of SO&CO to create one of the district’s most skinniest buildings. Due to the nature of the property, the architect was faced with several constraints: not only did they have to leave enough room for scaffolding but they couldn’t fit any heavy machinery into the plot. So everything had to be done by hand.

But the result is a surprisingly minimal and elegant 4-story building. Unlike many people’s perception of a high-end and ritzy Ginza, the majority of backstreets are filled with drab, nondescript office buildings. This structure stands out like a gem. Titled “Ginza Tenant Building,” it was completed in early 2019.

The entrance still feels very much like walking into an alleyway. But once you’re inside, light pours in through the many windows and skylight above.

The structure houses a total of 5 individual offices that are separated but accessible via the stairway, which doubles as a lightwell that feeds light into the nooks and crannies. There’s also a space behind the entrance designed to be used as a retail shop, along with a rooftop.

The building was designed to be leased in its entirety. We did a little digging and found the real estate listing! The entire building is currently available for 1.7 million yen, or about $16,000 per month. Not bad for Ginza! 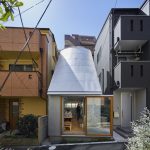 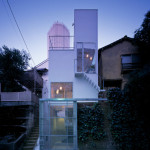 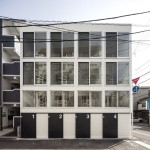 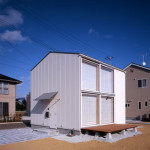