The prolonged electricity outages that are occurring in Chiba, Japan thanks to Typhoon Faxai have renewed an age-old debate: whether or not to bury Japan’s utility poles and electric wires underground.

Toppled utility poles can not only cause damage to surrounding homes but they can knock out electricity, an issue that has been front-and-center in Japan recently. In a press conference, Japan’s new land minister told reporters that he wants to escalate the issue of undergrounding all of Japan’s utility poles and electric wires.

According to that government ministry, Japan ranks far behind other major cities in the East and West when it comes to undergrounding utility poles. In Tokyo, only 8% of utility poles are underground. In Osaka that number is 6%. Compare that to the mid-double digits of cities like Jakarta and Seoul. Hong Kong, London and Paris have buried 100% of their poles.

Many issues have prevented Japan from undergrounding their power lines. For one thing, in an earthquake-prone nation it’s simply been easier to repair lines if they’re above ground. There’s also a very complex ownership structure and approval process that has to go through local jurisdictions, as well as any corporate entity that utilizes the poles. Then there’s the high cost associated with undergrounding.

But one unexpected obstacle has been public support. As it turns out, the citizens of Japan simply don’t mind them. In fact, some even like them. A few years ago a pro-undergrounding group created a campaign to garner support. For their main visual they took Katsushika Hokusai’s iconic ukiyo-e print “Fine Wind, Clear Morning” (also known as Red Fuji) and added utility poles and power lines to show how ugly they are.

When released, the campaign had the opposite effect. The resounding response from the public was, in essence, “that looks great” or “what’s wrong with that?”

Power lines are so entrenched in Japan’s landscape that they’ve become a prime subject for many artists as well. The photographer Yoshinori Mizutani captures kawau birds perched on electric wires in Tokyo:

At one point in his career, the artist Eiji Sumi exclusively painted utility poles and power lines to show just how beautiful they are:

There’s also a spot in Tokyo’s western suburbs of Hachioji where photographers flock to capture what is perhaps Japan’s most densly-populated neighborhood of overhead electric wires:

To build any sort of vast subterranean power network, Japan will need a lot of time, money and public support. And clearly, power lines hold a very special place in the heart of the public. To remove them would mean even more than simply altering Japan’s urban and suburban landscape. 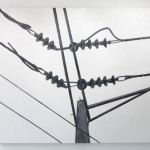 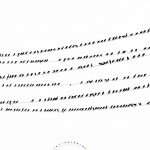 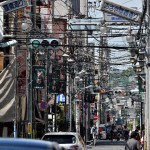 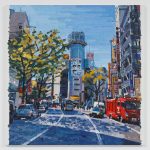