Mistletoe is an incubation office started in 2016 by serial entrepreneur Taizo Son, the younger brother of billionaire Softbank CEO Masayoshi Son. For the company’s new office in Tokyo, which opened earlier this year, architect Daisuke Motogi was tasked with a rather unusual request: to design a “perpetually unfinished” space that induces serendipity.

Mistletoe functions as a quasi-residency for entrepreneurs where Son uses his own capital to co-found business and then mentor them. The company places emphasis on technology that can help crate a more sustainable future. And while they have geographical coverage around the world, their largest market is Japan.

“An office isn’t a place for working,” explained Son, as a tried to communicate his vision for the new space. “What an office really needs to be is ‘a place that induces serendipity.’ ” In other words, the office needed to be fluid, while also encouraging curiosity and interactions between the residents. So the architects several different spaces within the office such as a theater for showcasing project, a kitchen and communal areas. The also designed makeshift furniture that could be drastically alter the space with just minor rearrangements.

You can read more about the office in this interview with the architect. 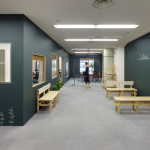 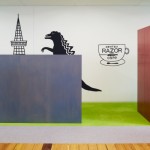 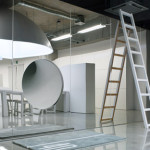