The artist Shohei creates dauntingly dense and bold ballpoint pen drawings. He happens to be the son of Katsuhiro Otomo, the creator of Akira, and goes only by his first name, perhaps as a way to escape the hegemony of his father’s shadow. Either way, he recently wrapped up a travelling exhibition of new works that was held in Melbourne, Hong Kong and then Tokyo.

On the 1st of May 2019,  Emperor Naruhito ascended the throne as the 126th Emperor of Japan, taking the nation out of the Heisei era and into the infancy of the Reiwa. Shohei’s latest body of work is named after that new era, and reflects upon Japan’s cultural transformation during the previous era with insightful depictions that expose Japan’s commercial and consumer culture.

As with his previous work, Shohei continues to deliver biting, political critiques that’s are as arresting as they are intimate. The work leaves Shohei’s voice front and center and the result is strong, theatrical and wonderfully nuanced all at the same time. 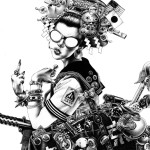 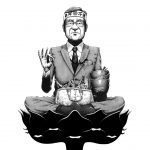 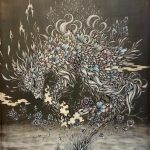 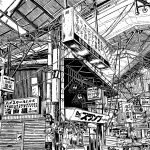