all photos courtesy the artist

Today, JR East unveiled a new permanent public art installation outside the east exit of Shinjuku Station. As part of a beautification project for the world’s busiest train station, Lumine Department Store, along with their parent railway company, worked with New York-based Japanese artist Tomokazu Matsuyama, who designed a public plaza for pedestrians that encircles a 25-ft sculpture titled Hanao-san.

The new public plaza is located immediately outside the east exit of Shinjuku Station. Artist Tomokazu Matsuyama explains that the theme for this new space is “Metro-Bewilder,” a place in the middle of Tokyo that will greet visitors with surprise and bewilderment. Visually, the artist attempted to draw out the many dichotomies that exist within Shinjuku. While evolving into one of the busiest areas of commerce and business, Shinjuku is one of the anomalies that has managed to maintain its local culture.

Tomokazu Matsuyama’s style of blending east and west, classical and pop, seems perfectly suited for an place where global and local collides.

The centerpiece of the plaza is a large 25-ft sculpture titled “Hanao-san.” Let’s meet at Hanao-san will likely become a common phrase.

a rendering of the completed plaza 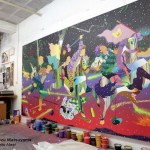 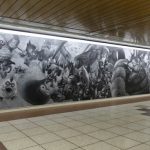 Illustrations by Rei Kato are a Summer Mood