all photographs by Masaki Sato

Kodo Nishimura grew up in Tokyo but moved to New York at age 18 to study art at Parsons. After returning to Japan to complete his training as a monk he then chose to travel again to Los Angeles where he furthered his classical training in makeup. Today, Nishimura, who identifies as non-binary, divides his time between his two passions: makeup artistry and the Buddhist monastery. He also recently published an autobiography celebrating sexual diversity and spreading the message in Japan that different is beautiful.

In his book, Fair and open: I can live as the person I wish to be, the 31-year-old Jodo sect Buddhist monk discusses his difficult journey growing up in Japan and not feeling welcome, to his experiences in the United States, which led him to his current state where he feels comfortable and confident in his own skin.

Nishimura grew up in a serene buddhist temple and the monk profession is a family business, which created additional anxiety, particularly around Nishimura’s penchant for makeup and the various gender roles traditionally held. However, Nishimura writes how a senior monk offered the following words of advice: “appearances and ritual manners are not the essence of teachings.”

Additionally, Nishimura encountered the following verse from the Amida Sutra, which embodies his view that everyone in all their uniqueness is beautiful:

The photographs of him here were all taken by Masaki Sato for a recent piece in Tokyo Weekender. You can also follow Kodo Nishimura on Instagram and Twitter. 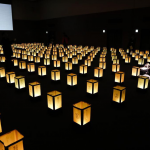