unless otherwise noted, all photos by Matthew Waldman

On August 1, 2020, Tokorozawa Sakura Town, a new suburban development in the northwestern outskirts of Tokyo, welcomed the opening of one of their major components: the Kadokawa Musashino Museum. Part museum and part library, the monolithic granite structure was designed by Kengo Kuma and developed by Kadokawa, a major publisher of manga and light novels.

The Kadokawa Musashino Museum is a surreal structure with a grandeur lacking in typical Japanese architecture. Surrounded by residential housing, approaching it feels as if you’ve stumbled across an ancient castle, or maybe a giant meteorite. That initial response isn’t far off as Kuma himself has said he imagined the building as having emerged from the earth’s crust.

The facade was made from 20,000 slabs of granite that were each cut and laid diagonally upwards by craftsmen. The facade alone weighs 1200 tones.

Inside the monumental building is 5 floors consisting of various sections dedicated to books, anime, art and other curiosities. However, it’s important to note that during the initial soft opening (August – October, 2020) only the first 2 floors are open.

One of the highlights will surely be the Bookshelf Theater Library (rendering below), a double-height space occupying sections of the 4th and 5th floor. With 8-meter (26 ft) floor-to-ceiling bookshelves, the soaring space will accommodate 50,000 books.

In addition to the museum, Kengo Kuma also designed a shrine and “living” torii gate with vines that will continue to envelop its exoskeleton over the years to come.

The Kadokawa Musashino Museum is accessible from Higashi-Tokorozawa Station, which is a little over a 1-hour train ride from central Tokyo. Over the next several months several other components of Tokorozawa Sakura Town will be completed, including the EJ Anime Hotel and Kadokawa corporate offices. 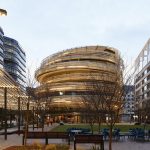 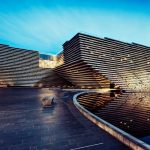