Camera aficionados take note: Canon has teamed up with a craftswoman to create drinking glasses inspired by the camera lens and made from the traditional Edo Kiriko craft of cut glass. Two varieties of the “Lens Glasses” are being produced. One is modeled after light while the other is modeled after the sound of a shutter, both invisible yet essential elements of the camera.

Edo Kiriko, the method of cut glass used to produce these glasses, is an offshoot of Satsuma Kiriko, a type of cut glass craft that dates back to the mid-1800s. When the craft was almost completely wiped out due to several wars that ravaged the Southern region of Japan, artisans traveled north to Edo (current day Tokyo) where the craft was rekindled.

The glasses will be available for order in December and will take roughly 3 months to ship. Right now, you can request to be notified when they’re ready to take orders. 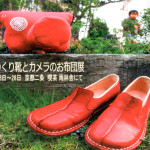 Tokyo Public Parks are Prepared for the Next Natural Disaster