Akudama Drive is a new anime set in a dystopian future Kansai. The story revolves around an antihero group of criminals known as Akudama who are pursued by the government. And while the story and characters propel forward, it’s the art direction — in other words, the stationary elements; the backgrounds — that create this anime’s arresting aesthetic, setting it apart from others.

The art direction is the work of Yoshio Tanioka, who, according to a recent interview, made conscious decisions to differentiate the anime from other cyberpunk aesthetics like Blade Runner or Ghost in the Shell. Tanioka spent plenty of time both walking around Osaka, but also studying the Showa-era look-and-feel of the 70s and 80s. By combining futuristic and retro, Tanioka managed to create a unique, cyberpunk showa-retro aesthetic. But he didn’t stop there. Tanioka then tapped into his own mind, which resulted in imaginative structures such as Kansai Chuo Hanko Center and Minami Dotonbori, where electric buses run on the water.

Akudama Drive debuted last month in October and is currently available through Hulu or Funimation. 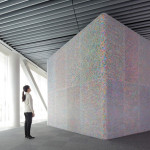