160 years ago the Kingdom of Prussia and the Tokugawa Shogunate signed the Treaty of Amity, Commerce and Navigation, which today is largely considered the starting point of German-Japanese diplomatic relations. In tribute to these long-standing ties, an expansive 80-meter (262 ft) mural has been created along the exterior wall of the German Embassy in Tokyo.

The monumental mural, which was curated by TokyoDex and created by the Osaka-based Japanese artist duo WHOLE9, features portraits of pioneers and events which have shaped the long history of relations between the two nations. Ascending the sloping street outside the embassy is to glimpse at avante-garde interpretations of the past, as well as what lies ahead.

Divided into six sections – medicine and science, culture, trade and economics, music, sports, and politics – the murals show photo-realistic portraits of trailblazers including Philipp Franz von Siebold and Mori Ogai, as well as more recent personages such as the East German conductor Kurt Masur and award-winning choreographer Pina Bausch. It will stay up for the remainder of 2021.

The Prussian merchant Louis Kniffler was the founder of C. Illies & Co., the first German company to set up trade operations in Japan in 1859. Next to him is Seibe Nakagawa, a Japanese beer brewer who had trained in the art in Germany and contributed to the establishment of Sapporo Beer.

Mori Ogai, left, was a Japanese Army Surgeon general officer, translator, novelist and poet. He introduced translated German literary works to the Japanese public. To his right is the dancer and choreographer Pina Bausch, whose works were celebrated in Japan.

Philipp Franz Balthasar von Siebold was a German physician, botanist and traveler. He achieved prominence by his studies of Japanese flora and fauna and the introduction of Western medicine in Japan. Alongside him is Kitasato Shibasaburo, a Japanese physician and bacteriologist who studied in Germany and will appear on the new 1000 yen note coming in 2024. 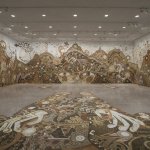