April 6, 2021 / Johnny / Comments Off on Tokyo’s Colorful New Toggle Hotel Stands Out in a Sea of Grey

Tokyo’s new Toggle Hotel, located in the neighborhood of Suidobashi, officially opened for business on April 1, 2021. Located on a triangular site and bound by the Shuto Expressway, the Kanda River and the Chuo Line railway, the hotel finds itself in the epicenter of Tokyo’s energy and vitality. Surrounded by a sea of grey monotone, the hotel takes inspiration from the movement and color of Tokyo’s energy, positioning itself as a iconic, colorful landmark.

Designed by Tokyo-based Klein Dytham Architecture, “the architecture emphasizes the horizontal movement of the cars and trains, with continuous window bands which trace the dynamism of the urban infrastructure and express speed,” says they architects. “The fresh yellow and concrete gray pattern was inspired by the graphic patterns on the expressway.” The signage and branding is the work of art director Shun Kawakami’s agency artless.

The bold use of colors is definitely not limited to the exterior either. When you first arrive you’ll check-in at the light-drenched reception lobby located on the top floor, which also acts as a cafe and main social hub. And the color palette will immediately give you a hint for what you’re in for. But you’ll already know because guests are able to book rooms based not only on size but color preference as well. There is no mistaking which floor you are on! There are over 60 different color combinations in this 85-room hotel, which is both stylish yet affordable. About sixty percent of the rooms have loft type beds which allow 3 people to stay in one room. Rates will fluctuate but right now rooms between 9200 yen (83 usd) and 16,000 yen (145 usd) per night.

generous green terraces give great views of the city and the 50,000 seat Tokyo Dome

the top floor reception and cafe 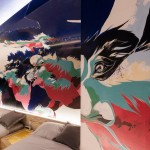 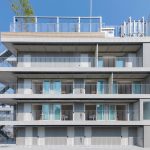 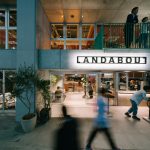