April 26, 2021 / Johnny / Comments Off on Craft, Coffee, and Cuisine Converge at the New Shika Saru Kitsune Building in Nara

all photos by Satoshi Asakawa

From across Sarusawa Pond are views of Kofukuji Temple’s five-storied pagoda. Wander uphill a bit and the Kasuga Taisha Shrine comes into view. Nara’s famed wild deer lazily munch on grass as if knowing that they’re held securely in the palm of Todaiji Temple’s Great Buddha. It is this neighborhood where Nakagawa Masamichi Shoten laid down roots over 300 years ago and is the location of their latest initiative: the Shika Saru Kitsune Building.

Nakagawa Masamichi Shoten has grown into a popular retailer of Japanese crafts. Although they have locations across Japan, the company is headquartered in Nara and their logo features a motif of the local shika, or deer. Within the new location they’re joined by two other key tenants: Sarutahiko Coffee, a specialty coffee shop that gets its name from a shrine dedicated to a monkey deity, and Kitsune, the Japanese word for fox, which is a new sukiyaki restaurant from Michelin-starred sio in Tokyo. And so the three animals — deer, monkey and fox — got together and created Shika Saru Kitsune Building.

The building was designed by architect Hiroshi Naito, who attempted to express townscape, tradition and modernity through architecture. The roof is tiled and the eaves facing the street are subdivided so that the façade does not look out of place within the small, winding streets of Nara. Like the town itself, the three-story building simply acts as a background for the various activities that go on inside. In addition to the three key tenants, there’s also a coworking space, a tea shop as well as venues where visitors can experience making various Japanese crafts and textiles. 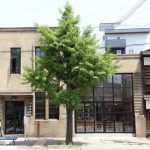 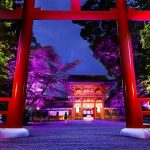 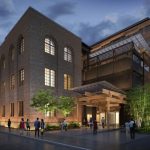 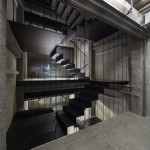