All photos by Kenta Hasegawa

Established in 1957 in Saga prefecture, Maruhiro is a family-owned business that produces hasamiyaki ceramics. Six years since the renovation of their flagship store, the company has embarked on a new initiative to help cultivate a sense of community in their town. They’ve renovated an 86-year old Japanese-style townhouse to function as an office, showroom, community kitchen and artist residency space.

The stunning renovation — the work of architect Daisuke Motogi (previously) — is being called Ouchi, a Japanese colloquial term for home. Due to the global pandemic, original plans were scaled back, which actually resulted in more of the original details of the townhouse being preserved.

The spectacular entranceway leads to an office space that was originally a tatami mat room. The floor was removed to create a sunken room that functions better as an office as it raised the ceiling height and allowed for direct views into the garden. The magnificent stone plinth foundation that appeared when the floor was lifted out, was also preserved. One characteristic of Japanese townhouses is that they’ve been originally designed for ongoing renovation and expansion. “This Japanese house was no exception,” says the architect, who sees infinite possibility in Japan’s existing stock of vacant housing, explaining that “by slightly changing its relationship, the original meaning can be altered.”

On the second floor, the tatami mats were also removed and replaced with wooden boards to create a residence space for artists. Ouchi in its entirety is part of a larger community park called Hiroppa that is being planned by the pottery company. It’s scheduled to open in September of 2021. 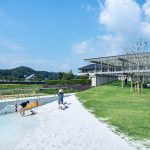 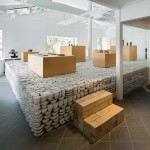 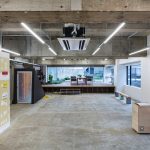 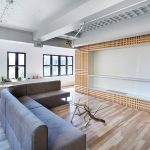