all photos by Akira Koyama

Thanks to a growing international audience, Japanese anime now represents a 2.5 trillion yen ($22 billion usd) industry. But it’s also notorious for poor working conditions, which has led to an exodus of animators and artists who now have more options to choose from like the gaming industry or other Asian markets. But MAPPA Studio, known for producing some of your favorite anime like Jujutsu Kaisen and Attack on Titan, are changing the game starting with the place where their animators spend the most time: the studio.

MAPPA Studio is no different. In addition to their headquarters in Ogikubo, they have several smaller studios in Asagaya and neighboring towns says Akira Koyama, the founder of architecture firm Key Operation who designed MAPPA Studio’s latest office in Ogikubo. The building was originally designed to be a clinic but was repurposed as an animation studio with the 1st and 2nd floors dedicated to production and the 3rd floor intended to be used by management.

Animators tend to prefer artificial light as opposed to natural light so their desks and studios are placed towards the back of the building. Meeting rooms and lounge areas were stationed near the windows. Desks were fashioned from larch plywood, bringing warmth into a space that could normally feel cold and uninviting. Desks were designed so animators can place their monitors on the back shelf, making room for tracing table and LCD tablets. Partitions were also designed to allow for the right mix of communication and focus.

According to the architect, MAPPA Studio has plans to eventually combine all their satellite office into a single office to create an “animator’s village” full of nature, along with shops and cafes that fans can visit. We can’t wait for that! 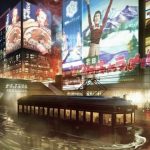