Many of you know that we have a soft spot for capybaras. So we were absolutely smitten when we discovered this capybara cheescake depicting the oversized yet gentle rodents soaking in an onsen, or Japanese hot spring. The delectable delight was created by university student and baker rinsforest, who says that they were inspired by the real life capybara hot springs of Japan.

Japan’s capybara hotsprings have become a social media phenomenon in recent years. But we actually traced its history back to Izu Shabonten Zoo in Japan’s Shizuoka prefecture. According to the zoo, on a cold winter day in 1982 a zookeeper was using hot water to clean the capybara cages when they noticed something strange. The capybaras had gathered together in a small puddle of warm water, dipping their limbs and bottoms in it. So the zookeeper decided to experiment by filling a pool with hotspring water and sure enough the capybaras quickly climbed in. Thus began an annual winter practice, which eventually spread to other zoos around Japan and then on to social media.

But we digress. The cheescake created by rinsforest is a mouth-watering replica of the practice. The baker explains, “I love watching Japanese wagashi artists make their crafts, and after struggling immensely with this, I admire their skills even more. I hope this brings a smile to your face.” 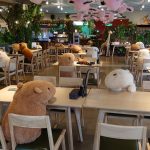 Fukuoka to Paint Giant Port Crane as Giraffe, Hopes it Will Cheer up Children in Hospital