With a little bit of close observation, the spirit of sporting, competition and the Olympics can be found all around us. And for Tokyo-based illustrator Adrian Hogan this rang true, especially over the last two years as Japan struggled to contain the coronavirus while also preparing to host one of the world’s most notable sporting events.

“in the midst of all the heavy down pours, occasionally a gust of wind will blow someone’s umbrella inside out. Watching them scramble to the nearest cover with their broken umbrella still in hand, reminds me of the Olympic Torch runners.”

From scandals and controversies to pandemic-related oppositions, the Tokyo Olympics have had their fair share of issues. But as writer Craig Mod points out, these illustrations are “one of the very best things to come out of the mess of the Olympics.”

There’s so much to appreciate in Hogan’s whimsical illustrations, which combine elements of Japanese culture with glimpses into contemporary everyday life. Each image captures heroic displays of athleticism that otherwise go unnoticed. Many also incorporate the challenges and obstacles of the pandemic, which render these athletes even more impressive.

You can see more of Adrian Hogan’s work on Instagram.

“Since March last year, cafes all across Japan have already been host to an event. In my imagination, the plastic barriers between the staff and customers are the perfect opportunity for a game of volley ball.”

“All over Tokyo, mothers and fathers thunder down shopping arcades while attending to the important business of supermarket shopping and getting their kids to school.”

“Everyday in Tokyo an event called the “Dash for the Last Train” is held all over the city.”

One of the benefits to our current State of Emergency is that the trains are much less crowded in the mornings. It’s a good chance for a little gymnastics warm up.

I saw a shop clerk recently who threw open their store shutters and it reminded me of a weightlifter throwing their barbell into the air.

When a salarymen launches himself at closing subway doors – it is like watching an Olympic long jumper throw themselves several metres forward in the blink of an eye. 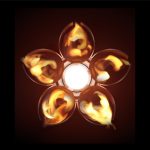