The ukiyoe artist Kawase Hasui (1883-1957) lived through tumultuous times, but you wouldn’t know it from his woodblock prints. Sometimes referred to as a poet with the spirit of a traveler, Hasui traveled Japan in search of nostalgic and everyday landscapes that struck a chord in his own heart. Often depicting the quiet and forlorn, Hasui’s art was perhaps his way of coping with the dramatic shift that was occurring in Japan: a rapid and widespread drive to modernize and engage with the rest of the world.

Born in Tokyo in 1883, Hasui was a prolific and influential artist of the shin hanga, or “new print” movement. He was “inspired by breezes, and spent his days traveling with the sun, clouds, and rain, painting the scenery of all four seasons of Japan. This was also a journey to seek the scenery of old times.” That’s according to the Sompo Museum of Art in Tokyo’s Shinjuku district, which is currently showcasing some 280 of the more than 600 works produced by the artist (on view through December 26, 2021).

For those unable to visit, the three videos below do a nice job of describing the exhibit, which is broken chronologically into three parts.

And if you’re interested in Hasui prints, New York’s Ronin Gallery is currently hosting an exhibition of prints at their gallery but also online that include rare pre-earthquake printings to post-WWII compositions. Many of the artist’s prints and sketches were destroyed in 1923 when the Great Kanto Earthquake devastated Tokyo. “The works that predate this event are extremely scarce and in great demand today,” explains the gallery. “Undaunted, Hasui continued to design prints until his death in 1957, fostering an audience both in Japan and abroad.”

Chapter 1: Hometown of Tokyo and Souvenirs from Travels

《The Ferry Port at Tsukishima, from the series Twelve Months of Tokyo》 1921, Woodcut on paper S.WATANABE COLOR PRINT CO. 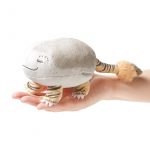 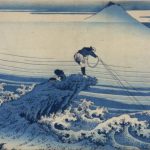