How do you teach the concept of mass? Our ability to sense weight and mass just by lifting things is a skill that’s atrophied over time, particularly in the age of video games and smartphones. But a group of designers and manufacturers have weighed in, creating Tsumi-gram: a new type of toy that helps build on the concept of mass from an early age.

Tsumi-gram, whose name is a twist on the Japanese word for building blocks, or tsumiki, is a tactile, wooden set of blocks with small weights embedded inside. And thanks to Japanese precision manufacturing, the blocks have varying weights regardless of their size, creating visual discrepancies that challenge a child’s early notion of weight.

As virtual experiences become increasingly accepted, it’s important to balance that with the development of psychical sensations through play, says designer Kentaro Hirase, who is spearheading the project. He worked with creative agency Cekai and precision manufacturing firm N AND N to create Tsumi-gram, which they hope to bring to market in late 2022.

In addition to helping sharpen their senses, children will find joy in scrutinizing blocks of different weights and creating shapes based on prescribed weights. 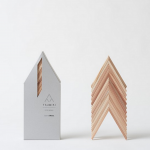 Water Shadow Curtain Turns Any Room into an Underwater Oasis