Earlier this year in April 2021, toymaker Bandai announced a new initiative called the “Gunpla Recycling Project.” With the cooperation from customers around Japan, the company began collecting the leftover plastic model frame sections of their pura-model toys. And over the weekend, the company’s efforts were unveiled at an event in Shinjuku.

The objective of the Gunpla Recycling Project was “to create the world’s first plastic model products through chemical recycling.” Indeed, at the event there were numerous toys and models all made from recycled plastic. Greeting visitors at the entrance was a Gundam head assembled from 3000 plastic model frames (called “runners”).

But the initiative that caught our eye was a collaboration with artist Yoichi Ochiai, who had used hundreds of runners to construct a tea house called “pura-an.” It was entirely functional and the accompanying tea cups were even made from recycled plastic. Ochiai, who is a proponent of digital art, even installed a digital hanging scroll that fluctuates between ripple-like images of the plastic model frames.

If you want to see more photos from the event, you can search the hashtag #エコプラ (meaning “eco-plastic”) on social media. (H/T Irene DB) 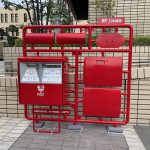 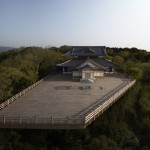