Giant floats paraded down the streets of Aomori last week for the Nebuta Matsuri, one of Japan’s most-iconic and heavily attended summer festivals. It was held for the first time in three years after a long covid-induced hiatus. A total of 18 floats featuring scenes from scroll paintings depicting warriors and mythology lit up the heart of the city. Pictured above is a float created by Asako Kitamura, Japan’s only female Nebuta float artisan.

The floats are all handmade and take several months to construct. And once the initial design is decided upon, the construction process can largely be broken down into five steps.

Massive amounts of wood and wire are intricately tied together to create the skeleton. Not only does the skeleton create the final form but it also supports the may lights that go inside the float. This typically happens from late May to early June.

The next step is covering the skeleton with skin. Paper skin, of course and once this step is complete the skeleton will never be seen again. Given how large the floats are (5 meters high, 9 meters wide) it’s a time-consuming process that lasts through mid-June.

Once the exterior skin is all attached, outlines are added to the structure and the initial design begins to emerge. Another part of this process is adding wax to areas that are intended to resist paint. This process usually lasts until early July.

The floats are now more than halfway done and they begin to come to life with color. Working with her team, Kitamura hand-paints the entire structure. It’s a combination of brush strokes and spray paint with newspaper used as a way to shield certain parts from the paint. The August festival is now approaching and the painting should be done before the end of July.

Step 5: lifting the structure onto the float (台上げ)

After some final touches to ensure the facial expressions are just right and the support joints are in place the paper structure is lifted onto the float and secured. A few electric tests and the float is now ready for showtime.

Asako Kitamura was born in 1982 to Takashi Kitamura, a 6th generation Nebuta float artisan. At the age of 25 she decided to pursue her father’s footsteps after seeing his work and being inspired by it. In just 5 years she became an officially recognized Nebuta artisan in her own right and has been contributing to the festival ever since. You can keep up with her on Instagram. 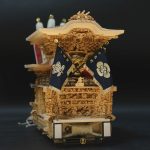 Remembering Loved Ones With Incense Shaped After Their Favorite Hobby