Gunkanjima from Above: Exploring What Was Once the World’s Most-Densely Populated City

all aerial photos shot with drone by Jordy Meow

Gunkanjima, or battleship island, is a small abandoned island off the coast of Nagasaki. Originally just a small mound sticking out of the sea, it rapidly transformed into a prosperous, miniature city after coal was discovered in the late 1800s. Although the island does offer tours, over 90% of the land is off limits due to risk of collapse. So today we’re sharing some aerial photos captured recently by Jordy Meow using a drone, combined with archive photos.

Gunkanjima supported Japan’s industrial revolution all through the early to mid-1900s. And as coal production expanded, so too did the island. From 1893 to 1931, Gunkanjima underwent 6 different man-made expansions, resulting in its current, surreal form, which has become a source of fascination for urban explorers. Each expansion is shown in the graphic to the left.

Coal mining jobs on the island were risky, but came with high pay and people flocked there with their families. At one point the island, with just a 1.2 km circumference, was home to 5300 people, making it the most-densely populated city in the world.

a total of 71 buildings occupy the island but all are off limits. The only areas that guided tours are allowed to visit is the wide-open area seen on the left side.

During its heyday, Gunkanjima, in an effort to attract workers, was home to luxuries that were unheard of in other parts of Japan. Literally, the homes were feats of engineering. The multi-storied apartments were made from reinforced concrete–the first in Japan­–and built around the time when the technology was first being proven around the world.

this corner of the island is where the majority of apartments were built. The U-shaped build was the largest building on the island. The green rooftops seen to the right are remnants of Japan’s first rooftop farm

Gunkanjima even had what is thought to be Japan’s first rooftop farm. Although the island had daily deliveries of fruits and vegetables, residents believed that agriculture was an important part of education and created the rooftop farm to teach their children how to farm.

this is a great shot because you can see the rooftop farms but take note of the structure to the top-left of the farms. Although there’s hardly anything left of it, that was the island’s shrine–one of the first structures they built–to pray for good health and safety.

And of course the miniature city had all the other modern conveniences: their own school, hospital, public baths, shrine and rooftop playgrounds. There was no shortage of entertainment too. There was a movie theater, swimming pool, bars and pachinko parlors. And at time when electronics were reserved for the very wealthy, every home came with a refrigerator, television and washing machine.

from this angle you can see the living quarters on the right. the white building on the left was the elementary and junior high school. The open field in front was a playground but the school also had its own gymnasium on one of the top floors.

But as crude oil replaced coal, Gunkanjima shrank just as fast as it grew. Operations officially ceased in 1974 and the last remaining residents left the island in January of that year. For almost 50 years the island has been slowly deteriorating. Today, it’s a ghost town but the remnants are enough to paint a picture of what must surely have been one of the most unique places in all of Japan.

the last of the residents leaving the island 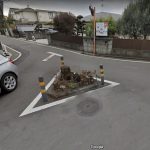 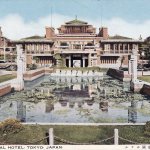