October 22, 2022 / Johnny / Comments Off on Sculptural Concrete Lighting by Ryuichi Kozeki Looks to the Past for a Sustainable Future

Japanese designer Ryuichi Kozeki has created a new series of sculptural desk lamps called “Figure of Light.” The pieces, explains the designer, are inspired by the skylight of the Pantheon in Rome, and so it only made sense that the material also pay homage to ancient roman techniques as well.

Modern concrete degrades within decades, especially in harsh environments. But Roman concrete has stood the test of time for over 2000 years. And recently scientists discovered the secret behind what Roman philosopher Pliny the Elder described as “a single stone mass, impregnable to the waves and every day stronger.” It was a mixture of volcanic ash that helped bind the fragments together.

To create his sculptural lights, Kozeki used fly ash, a byproduct of thermal power plants, and combined it with concrete. In doing so, he not only created a beautiful, durable product but also managed to dramatically decrease its carbon footprint. The initiative offers hints for creating more sustainable materials.

Kozeki’s work is on display this week in Tokyo as part of the 2022 edition of DesignArt Tokyo. Spoon & Tamago is a proud media sponsor for the event. 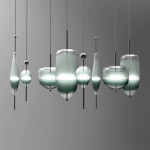 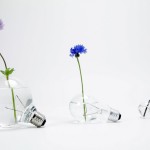 ForestBank: A New Type of Lumber Made From ‘Worthless’ Forest Debris by Yuma Kano